Cheverton chalk pit saw the first unsealed round of the 2019 championship. A tough venue with smooth chalk, deep ruts and loose gravel sections, not to mention the ramp that joins the upper and lower areas.

Straight away it was clear the battle for the top step of the podium would be between Joe Moore in his Subaru Impreza and Dan Young in his stripped out classic Mini. The pair were keeping a nervous eye on Michael Marrison in his Puma engined Ford Fiesta – he was on typical fast form but struggling to put a clean time on the board.

Class 1 was hotly contested, with Louise Wren and Shane Parry bringing the fight to Steve Glass. In the end, Steve managed to take the class win and even beat Steve and Marion Brett’s class 3 Mini.

Hannah Thompson took fastest lady of the day in Michael’s Fiesta whilst leaving bits of car strewn all over the course. In the end, the entire exhaust, one arch liner and a subframe mount met their demise.

By the end of the final run the podium was Michael Marrison in 3rd, Dan Young in 2nd and Joe Moore in 1st.

Our next unsealed event is at Knighton Sandpit on 26th May. 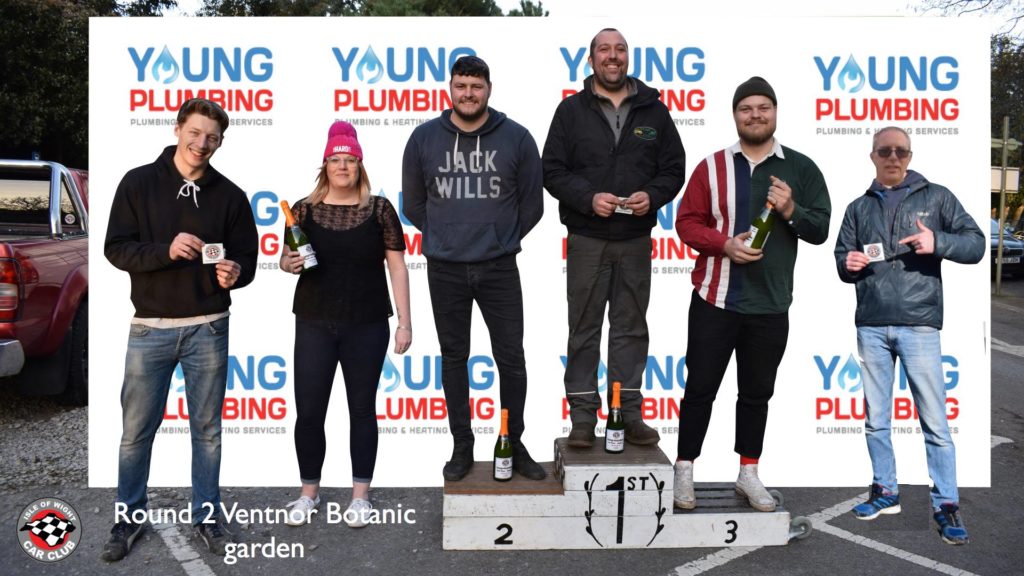 The Isle of Wight Car Club made a welcome return to the grounds of the Ventnor Botanic Garden.

The Ventnor Botanic Gardens is a picturesque venue on the south side of the Island sheltered form the cold northerly wind by the Ventnor downs. It contains many tropical trees and plants and is not the normal place that you would expect to see motor racing, however, the owner kindly allowed a large section of the garden to be closed, so that the Isle of Wight Car Club could run an autotest.

This unique event encouraged current members to bring some exciting cars out of storage and entice new members to join the club and have a go.

The slight down side to this event is, that, if you were to push a little too hard and leave the course due to being over enthusiastic, the penalty is, that the flora and fauna and not to mention a scattering of rocks are very unforgiving.

Class one cars are unmodified cars under 1400cc. Steve Glass drove his MGZR to this class win pipping Hanna Thomson by only a few seconds.

Hanna, however, was awarded fastest lady of the day and it must be noted she was also faster than Brian Robbins and Dan Young who were also driving her car.

Class 2 is for unmodified cars over 1400cc and Dean Long in his MX5 was a joy to watch proving slow is smooth and smooth is fast.

Dean Long was unable to accept his class winner’s award at the podium celebration as he went home to kindly lend his van and trailer to the Lower family as their car had suffered irreparable damage during the last run and as they had made the trip to the Isle of Wight from the mainland in the car they were competing in were rather stuck with no way of getting home.
So I would like to say a big thank you on behalf of the club to Dean and Tony for helping the Lower family in their hour of need.

As a small compensation Zach Lower managed to claim class 4 honours and 3rd place on the podium before the car was damaged and we are assured the car along with the Lowers will make a return.

Class 3 went to Adam Greenen in his classic Mini.

Class 5 is the domain of the specials and Lowcost cars, however, Michael Marrison in his class 5 Puma powered Fiesta again wowed onlookers by out-performing other more performance orientated cars and finishing in 5th place over all. Chris Wilson took the 2nd step of the podium in his special but with a huge lead taking the class and overall win as Ryan Munt.

Thanks to the success and generosity of the Ventnor Botanic Garden the Isle of Wight Car Club hope to return to this venue for its final round of the year. 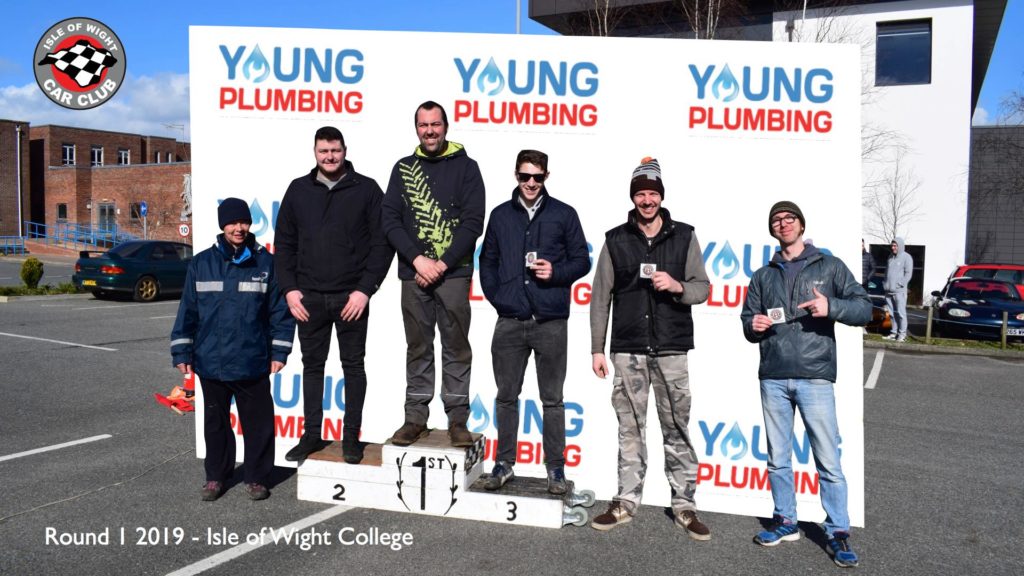 On the club’s AGM and award evening on Friday drivers were presented with trophies for their achievements in the 2018 season, however, competitors had no chance to rest on their laurels as on the Sunday the first round of the Isle of Wight Car Club’s 2019 championship was held at the Isle of Wight College car park in Newport.

Those wanting to win a trophy at the next awards evening knew that every point in the championship counts and were keen to get a good result at this event. With high winds and heavy showers forecast competitors were going to have to work for every point.

The course was a mix of open sweeping sections suitable for the more powerful cars but finished with a fiendish super tight slalom towards the stop box where the smaller more agile cars could make back time.

Michael Marrison in his stripped out Fiesta made a great impression by posting some very competitive times early in the day, as well as new member Liam Wildish in his amazing classic VW Beetle hiding a Subaru Impreza engine. Driving a more traditional Subaru were Andy Williams, John Barrett and Joe Moore, however, despite the showers they could not take advantage of their all-wheel drive systems to get onto the podium.

In the damp conditions, sliding your car around the tarmac can be great fun and many drivers span or performed a few doughnuts resulting in nothing more than a slow time and a large smile. Adam Greenen on the other hand clouted a curb in his classic Mini but despite a little damage to his indicator was good to carry on. However, Steve Wells left the track in the damp conditions and ended his day of competition by completely re-arranging the custom front suspension of his class 5 car.

Despite the damp conditions and the occasional off, this was a fantastic start to the season and great to see so many competitors and spectators.

At the podium celebrations, fastest lady of the day went to Louise Wren driving her Ford Puma, our class 2 winner was Wayne Hole in his MX5 and our class 4 winner who just missed out on the podium was Joe Moore.

The next event is on the 24th of March and will be held within the grounds of the Ventnor Botanic Gardens.

Every year we hold a non-championship autotest before the start of the season. This is a great event that lets members shake down their vehicles or just have a go for the first time and find out what this grass roots motorsport is all about.

This year was no exception, with John Cooper bringing his newly prepared mk2 Escort out to play and Matthew Griffin letting loose in his RX7. There were new members – and new drivers – testing their skills against the course; not least Oliver Nolan in his Fiat Panda and Kyah Wells in a borrowed Renault Clio. Both were taking full advantage of the advice offered by more experienced members on the day and showed great improvement. It just shows you don’t need to have been driving for years or even have passed your test to compete at our events. Well done to Oliver for taking the Class 1 win on the day.

Class 2 was claimed by Brian Robbins – usually found in the timekeeper’s chair or wielding a spanner but once again enjoying being behind the wheel. Charlie Lower was the only entrant in class 3 with his autotest prepared classic Mini. As well as the class win he looked set to take the overall top spot, but had to settle for second in the end.

MX5s and Imprezas dominated Class 4 and the majority put on a great show of sideways action for the spectators. After the final run it was Joe Moore who took the class and overall event win, beating Charlie Lower by just 8 hundredths of a second. Zach Lower rounded off the overall podium by hustling his BMW compact into a very credible third place.

Our next event is a Production Car Trials at Haslett Farm on 3rd March.