WANTED – farmers do you have any round silage bales left in storage and no longer usable for animal feed?We need lots and lots and lots of bails for the 2022 Sandown Sprint. – the event is the 2/3 April so we will start setting up on 30 March and remove by end of 5 April – if you are able to help please get in touch. Thank you

When the sun is out and sky is blue Atherfield has to be the most enjoyable unsealed surface venue on the Isle of Wight Car Club calendar.

The 19 drivers who competed in round 8 on the 5th of September were treated to these exact goldilocks conditions.

Joel Gilby sharing his Fiat Panda with his father Charles Gilby were competing in class 1 and Joel being under 18 years of age took the award for the fastest Youth.

If you are over 14 years of age and you would like to drive at car club see our website for more details.

Shane Parry always seems to be able to put in a blinding performance and today was no different finishing in his Puma first in class one and 6th place over all.

Emma Hobbs in her MX5 consistently improved her times throughout the day and was todays class 2 winner.

Class 3 is for modified cars under 1400cc and the top 2 places in this class was a battle of the Steves. Steven staff in his Nissan Micra and Steve Glass in his Clio. After a day of trading places on the leader board Steve Glass managed to pip Steven Staff to class win by only 0.18 of a second.

Class 4 is for modified cars over 1400cc and the top 3 battling for this class win was Jakey Jarrod and Jon Barrett both driving 4wd imprezas and Wayne Hole in his Ford Focus. Jakey Jarrod has been improving as a driver all year and today finished 3rd in class and 5th overall, Wayne finished 2nd in class and just missed out on the podium finishing 4th overall.

But it was Jon Barrett dominated the day winning class 4 and standing on the top step of the podium as the event winner.

Class 5 is for heavily modified cars Such as the single seater special of Andy Williams and the stripped out Ford Fiesta of Michael Marrison. Andy finished 2nd in class and stood on the 3rd step of the podium and an awesome drive by Michael earned him a well deserved class 5 win and second place over all.

The next event is another unsealed surface event, this time at Knighton Sand pit on the 10th of October. Please check our website for more details. www.iowcc.co.uk

Knighton Sand Pit has a reputation as a car killer – but its just not true.

16 competitors competed in round 7 of the Isle of Wight Car Club calendar, and interestingly quite a few chose to drive completely standard cars in the unmodified classes of 1 and 2.

IN class 2 Robbie Cooper shared his Corsa with Father and son paring of Barry and Kevin Richardson. In an attempt to prevent a repeat of their last outing at Knighton where Kevin managed to write off their shared Skoda by punching a hole in the sump when he hit a rock, they crudely fabricated a sump guard out of some crap aluminium in the pit area before the start. Despite this very Heath Robinson approach the car survived the day allowing all 3 drivers enjoy a day of club motorsport without too much incident.

However, it was the shared class 2 car of Jennie Stangle, Steve Wells, Dan Young and Clive Stangle who were competing in the most unlikely of cars – a Mitsubishi space wagon. More at home on a trip to Tescos or the school run rather than being thrashed around a sand quarry this car not only proved to be very entertaining but surprisingly competitive.

The car made it all the way to round 5 (a total of 16 runs) before having its suspension smashed after hitting a rock. Despite this Clive Stangle managed to not only produce the fastest class 2 time but just missed out on the podium finishing 4th place overall.

Steve glass took the class 3 award in his Clio that he shared with Sue Mitchell and Louise Wren took the fastest lady of the day award in her class 4 Puma that she was sharing with Shane Parry who took this car to the 3rd step of the podium with a very impressive drive.

Jon Barret also in class 4 but driving his 4wd Subaru claimed the 2nd step of the podium and the class 4 win but it was Andy Williams who dominated the event in his single seater class 5 special standing on the top of the podium.

All cars no mater what class you run in are permitted to have a sump guard to prevent damage, however, nothing can protect your car from over enthusiastic driving. Not that we would ever want to stop that.

For more information on how to take part please visit our website www.iowcc.co.uk

The Isle of Wight College is always a challenging and rewarding venue.

Bucking the trend of previous years this event had more drivers competing in standard cars than modified. Motorsport need not be expensive and sharing and driving a normal road car can be so much fun.

Class one is for unmodified cars under 1400cc Sue Mitchell, Cathy True, Gordon Bushell and Shane Parry were all battling for this class win, however, it was Shane in his Puma that came up trumps and finishing 7thoverall in the process.

Class two is for unmodified cars over 1400cc and in this case this class was occupied by standard MX5s. Barry Richardson and Emma Hobbs were trading places during the day, Emma took the award for the fastest lady of the day and Kevin Richardson was punching above his weight battling with the modified cars.

Class 3 is for modified cars under 1400cc and Dave Goodwin was all alone in his modified classic mini. The class 3 win was in the bag but he was peddling hard and just missed out on a podium position finishing 4thoverall.

Class 4 is for modified cars over 1400cc. Jakey Jarrold had cooling issues with his Subaru, but Jon Barret in his Subaru called clubby took the class win and the 3rd step of the podium

Kevin Richardson finished the day on the 2nd step of the podium demonstrating that standard doesn’t have to mean slow, but, the event win went to Andy Williams in his single seater class 5 special.

A great day of club motorsport and so inspiring to see members wringing all of the performance out of their daily drivers.

Round 6 was another unsealed surface event

Threading their way between piles of rubble and excavation machinery, 18 drivers kicked up dust and enjoyed the challenging venue of Knighton Sandpit.

It was fantastic to see 5 competitors contesting the title of The Fastest Lady of the day, Hayley Schuchart in her Citroen, Laura Parry in her MX5, Cathy True demonstrating some very competent skills in her Lupo, Sue Mitchell is flying this year in her Clio, however it was Louise Wren who not only took the honours of the fastest lady but also finished 6th place over all.

Fastest Youth was Joel Gilby in his Fiat Panda and to his relief Charles Gilby managed to just stay ahead of his son to be the fastest in class 1.

Class 2 went to Kevin Richardson, however, during his last run damaged the sump on his borrowed Skoda scuppering the chances of his team mates going any faster and Steve Glass took home the class 3 award.

Shane Parry was again showing some exceptional skill in his class 4 Ford Puma and was rewarded with his first ever podium spot finishing 3rd overall. Jon Barrett in his AWD Subaru took the second step and the class 4 win but it was Andy Williams in his single seater class 5 car that took the event win.

Andy is building I nice lead in the championship, however, as we know anything can happen in motorsport.

For more details on how to spectate or even compete at a future event head to the club website at www.iowcc.co.uk

The Isle of Wight Car Club returned to BAE systems in Northwood for round 3 of their forward only Autotest season.

Auto-testing is a driving challenge where competitors drive a set course around cones, striking a cone incurs a time penalty and the fastest time of the day wins, however, there are many different classes depending on the type of car you wish to use.

Andy Williams was set to win this event as he was consistently posting the fastest times during the day in his single seater class 5 special, however, on the last run of the day Wayne Hole in his unmodified class 2 MX5 relegated Andy to the second step of the podium with a masterly drive.

3rd place went to Kevin Richardson in his standard class 2 MX5 and It’s great to see standard cars on the podium proving anyone can be competitive in this easily accessible sport no mater what car you choose to drive.

Class 1 is for unmodified cars under 1400cc and Gordon Bushell in his Smart Roadster took the class win. Not far behind was father and son duo Charles Gilby and Joel Gilby in their class 1 Panda. Joel is under 18 years old so was also in competition with Max Snudden who is also under 18 years old and sharing an MGBGT with his father. The youth championship is now in full swing and in this round it was Joel who took the fastest youth title.

If you are 14 years or above and would like to take part in a future event please head to the club website for more details.

New member Hayley Schuchart was competing in her class 4 MG3, so not only was she competing against the other modified cars over 1400cc she was challenging Sue Mitchell for the honours of the fastest lady of the day. Jon Barrett took the class 4 award and after some friendly competition sue stayed ahead of Hayley to claim the lady’s award.

The next event is on grass at Atherfield on the 27th of June. Head to the club website for more details www.iowcc.co.uk

The next event is an Usealed surface event at Atherfield.

You can enter on line at
https://iowcc.co.uk/autotest-championship/don’t forget you will need to have a motorsport UK RS clubman licence – this is free and you can apply here
https://rsclubman.motorsportuk.org/…

You will also require an IOWCC membership you can apply here
https://iowcc.co.uk/membership/ 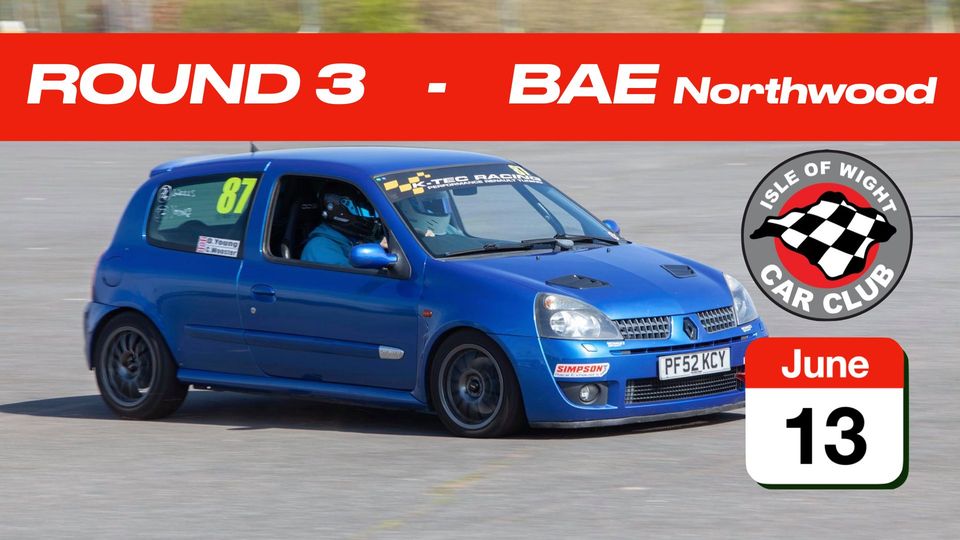 Round 3 of the 2021 IOWCC championship will be held at BAE systems in Northwood.
You can enter on line at
https://iowcc.co.uk/autotest-championship/
don’t forget you will need to have a motorsport UK RS clubman licence – this is free and you can apply here
https://rsclubman.motorsportuk.org/…
You will also require an IOWCC membership you can apply here
https://iowcc.co.uk/membership/ 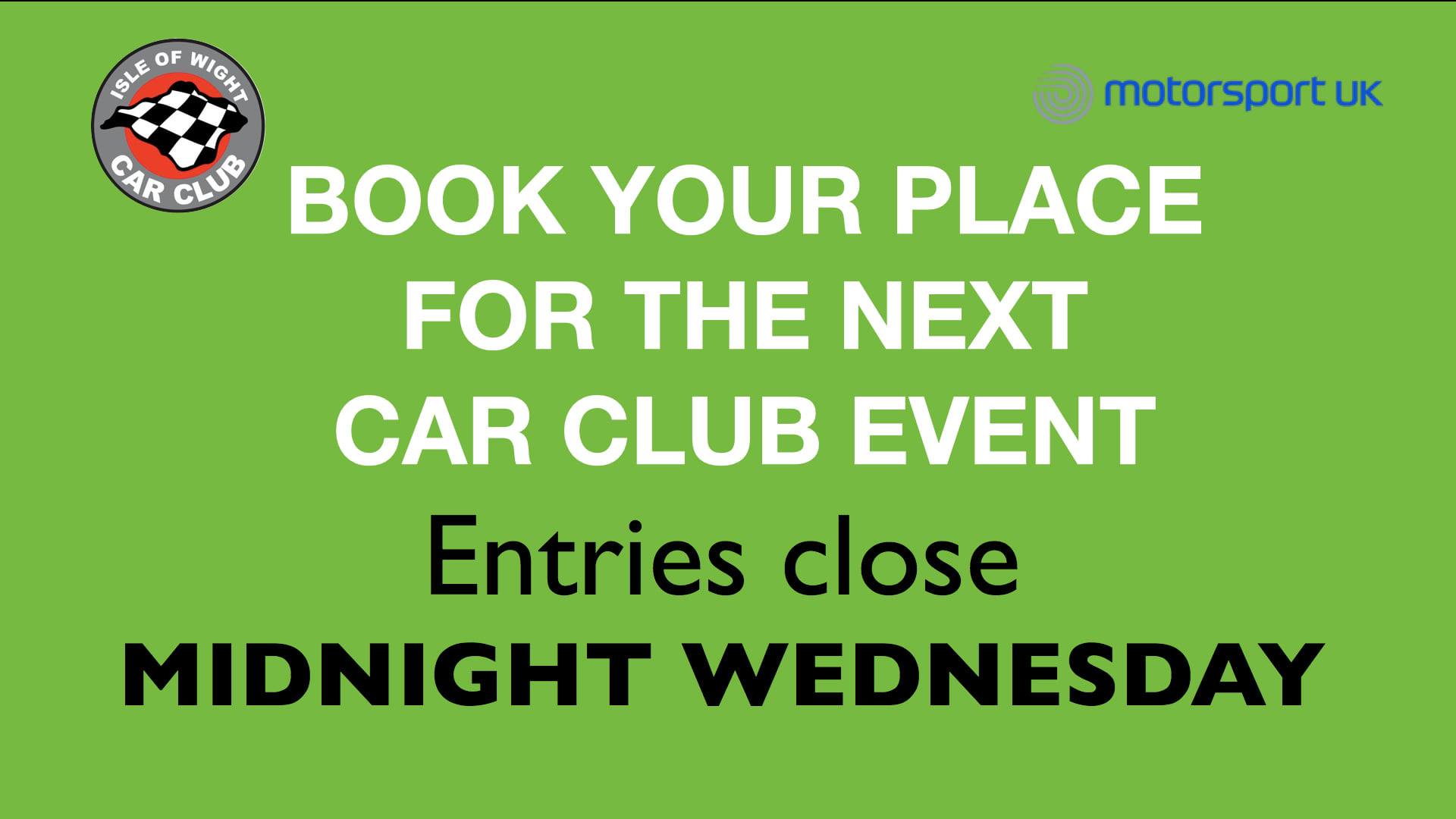