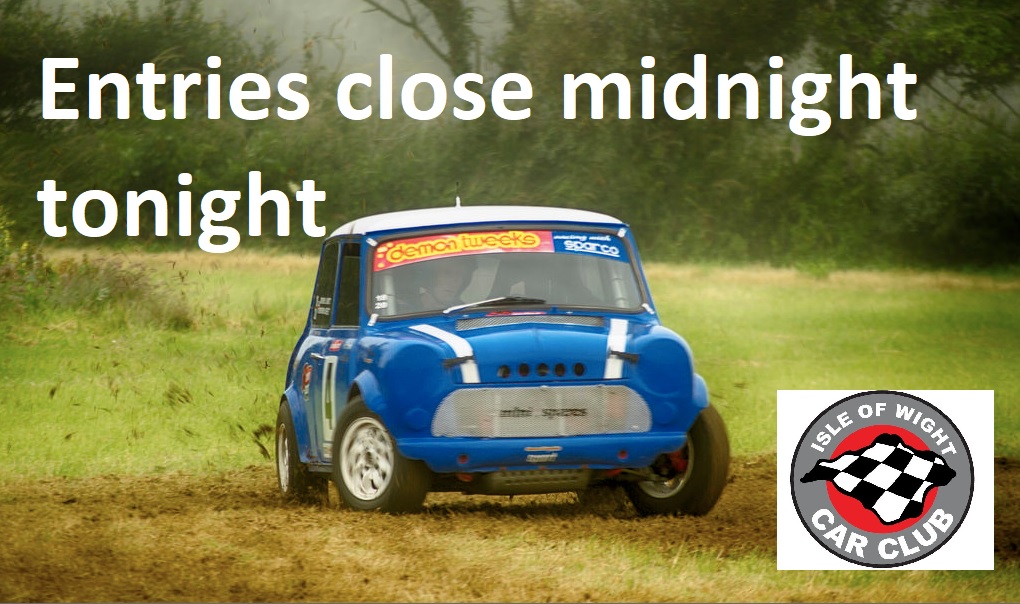 To meet the current government and Motorsport UK guidelines we have implemented procedures to help safeguard us all against Covid 19. These include :- 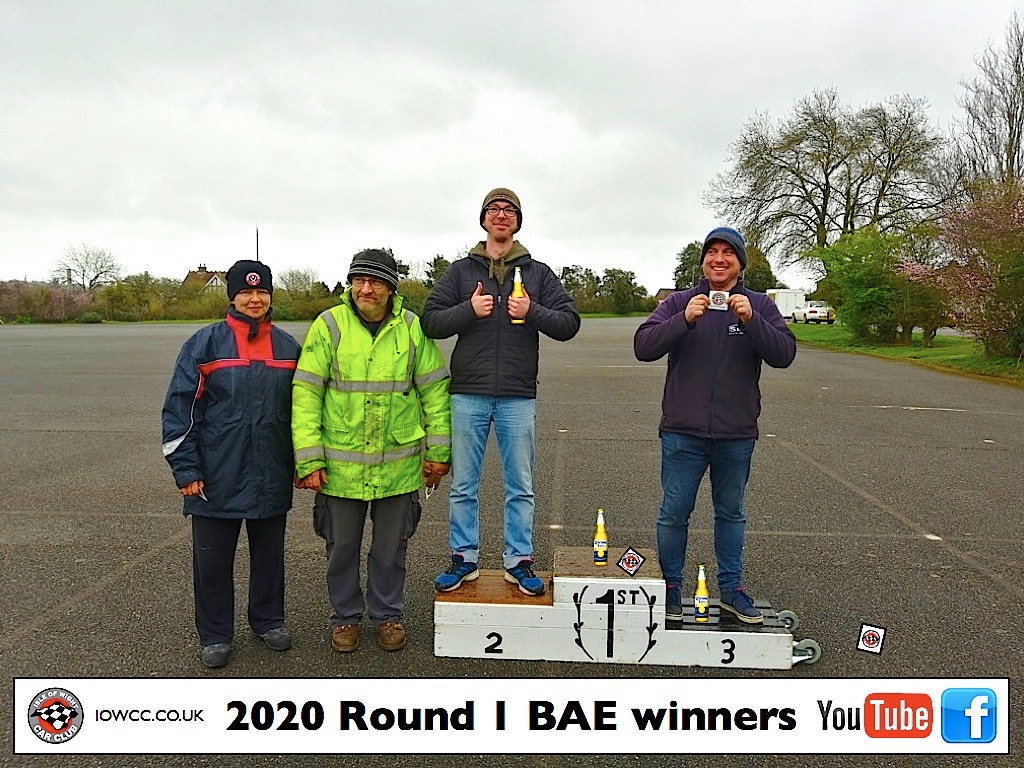 29 drivers competed at Round 1 of the Isle of Wight Car Club held at BAE in Northwood.
Excitement for the, now unfortunately postponed, Sandown Sprint encouraged many spectators to come and see how accessible grass-roots motor sport on the island can be.
For only £20 members of the Isle of Wight Car Club can compete in a day of forward only Autotesting. This consists of a driving challenge around cones, each driver has 6 attempts and their fastest time of the day decides their position on the leader board at the close of play.
Right from the start, long time club member and international rally driver Richard Weaver threw down the gauntlet posting a blistering time in his rally Evo.
Richard’s Evo was not the only car to wow the spectators. Adam Pomeroy in his Nissan R32 Skyline and George McFarlane in his BMW Z3 proved that posting your fastest time of the day need not be your primary goal, having fun and driving at the limits of your tyres’ adhesion can not only put a big smile on your face but entertain onlookers. 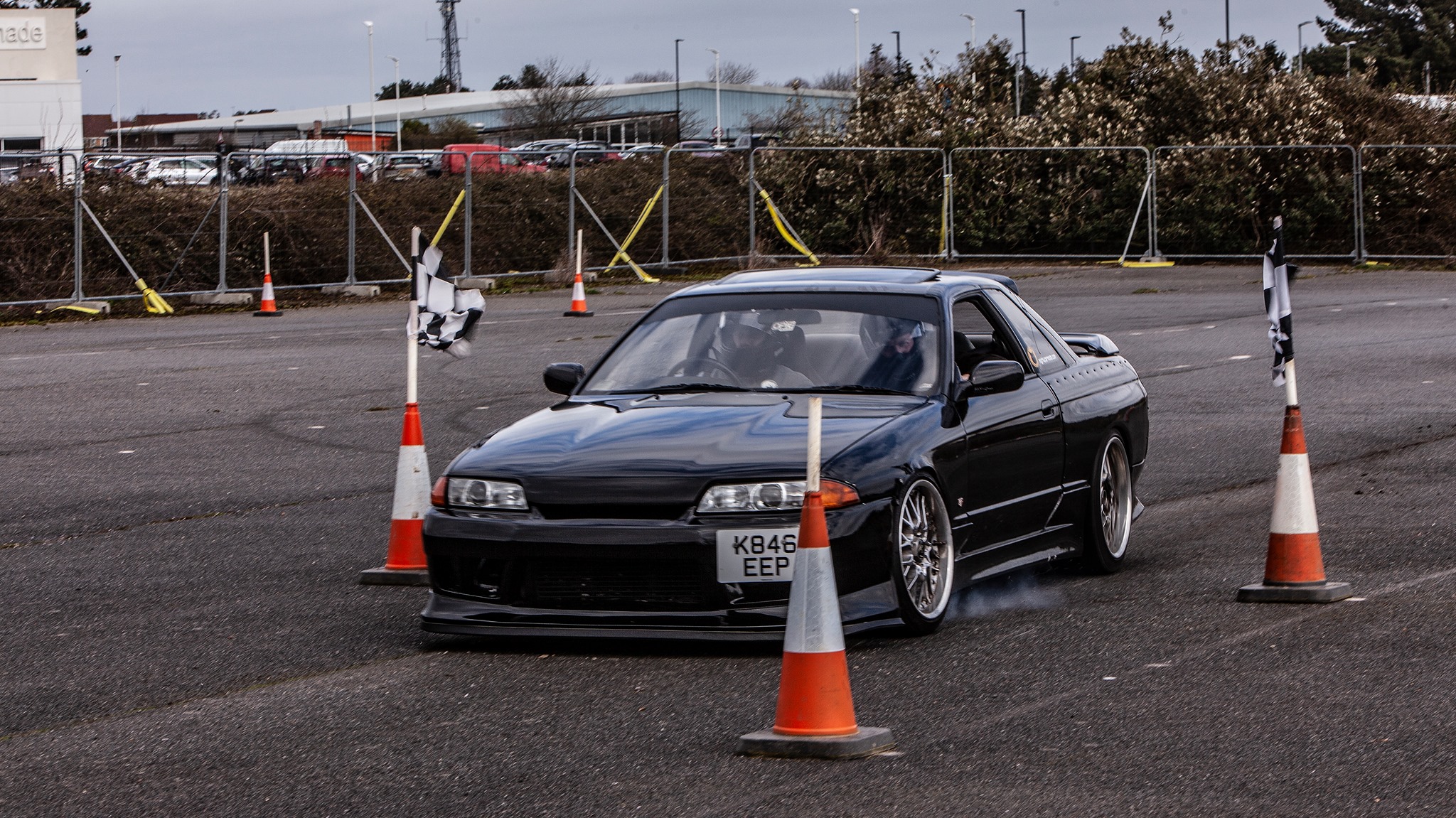 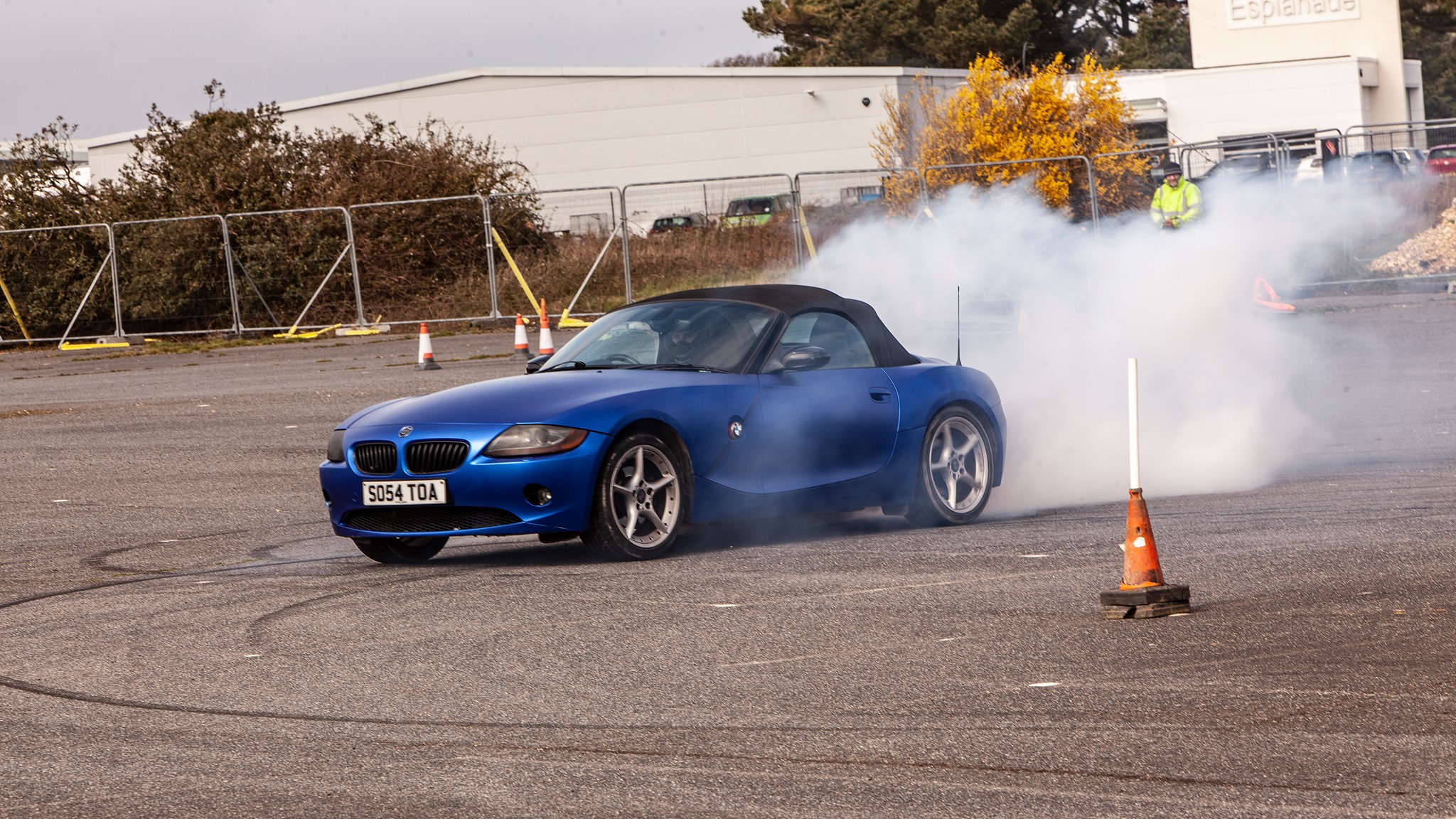 Class 1 may not seem as exciting as the more powerful fire spitting classes, however, if you would like to try this sport, an unmodified car under 1400cc is all you need. Shane Parry took class honors and also finished in 19th place overall ahead of some much more powerful machinery.
Louise Wren, Tahnee Attwood, Laura Parry and Karen Moore were competing for honors as the fastest lady of the day and this was deservedly won by Louise Wren. 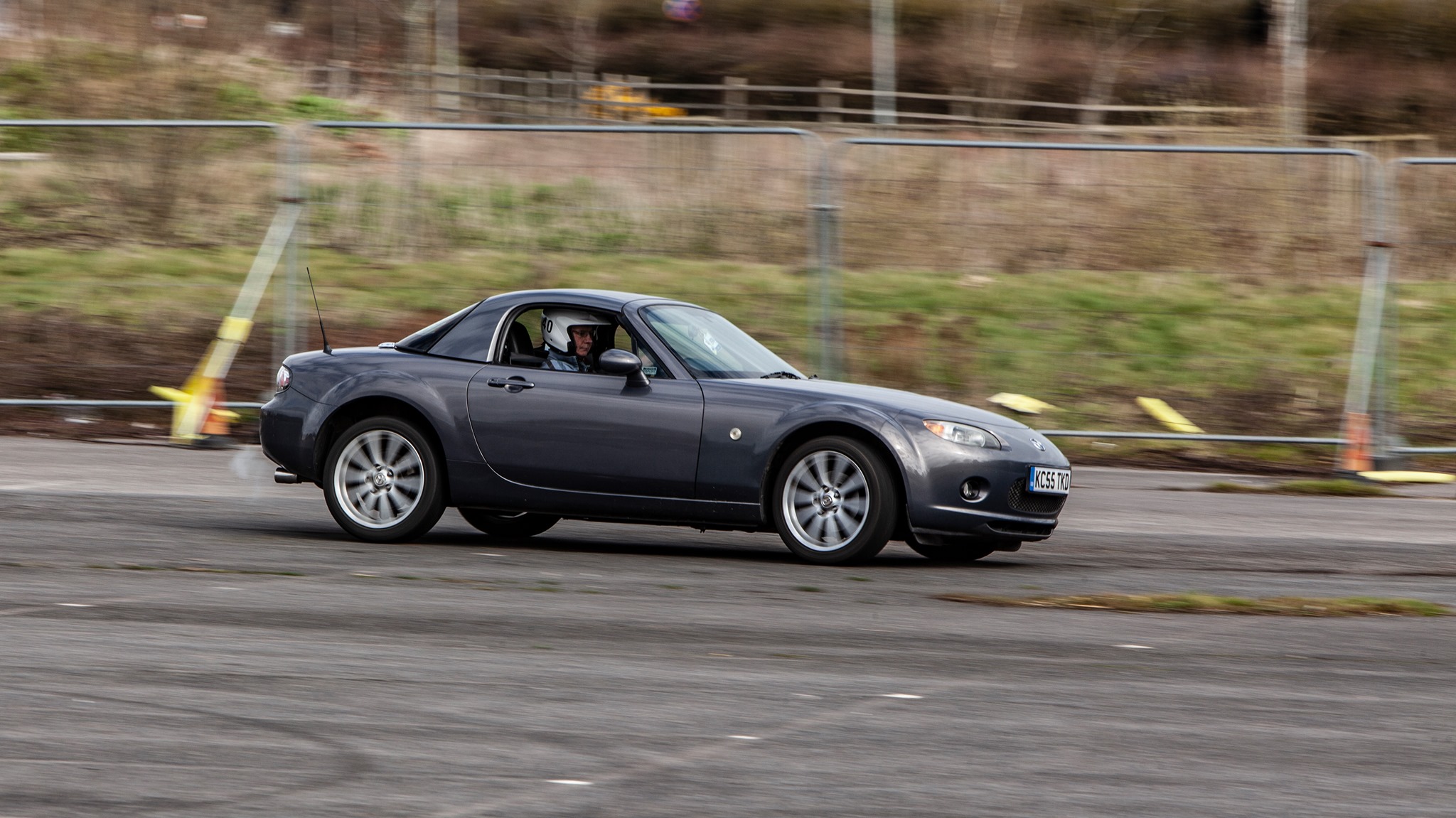 Class 2 is the home of unmodified cars over 1400cc and was littered with MX5s, in fact 14 drivers sat behind the wheel of an MX5 in today’s event. These little cars may have a reputation as a standard issue mode of transport for all hairdressers, however, they are very competitive, cheap and fun to drive.
Wayne Hole in his class 2 MX5 narrowly missed the podium proving that, if you know how to drive, you can achieve a lot with a very basic car.
Class 3 is for modified cars under 1400cc. Dave Goodwin in his classic mini has always been hard to beat, however, Steve Glass fancies his chances for this year and has modified his MG ZR that he won the class 1 championship in 2019 in and is looking for another cup to add to his trophy cabinet. Dave managed to stay ahead of Steve for this event, winning the class and finishing 7th overall.
We had some inquiries from younger members aged 14-17, as they can now drive and compete with an experienced passenger at their side. We hope to see them behind the wheel at a future event.
If you are interested in the IOWCC Youth Championship, visit our website or ask at race control. 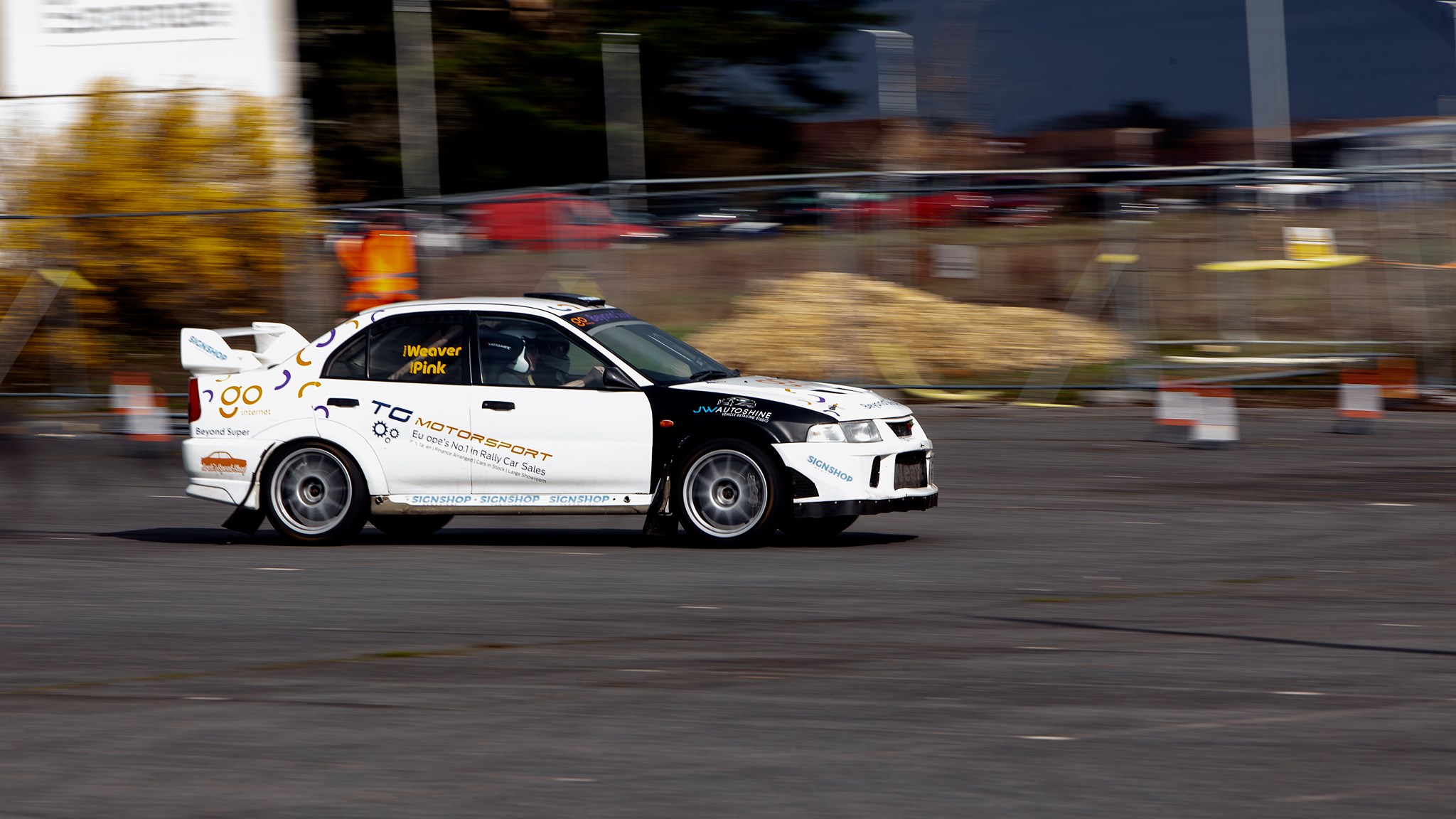 Class 4 is for modified cars over 1400cc. Adam’s Skyline, Richard’s Rally Evo, 2 Subaru Imprezas, a Lotus Elise and a good smattering of MX5s all sit in this class.
John Cooper in his Mk2 Escort finished 6th place overall but was denied a chance to improve on his time as he snapped a half shaft launching off the start line during run 6.
Class 5 is for heavily modified cars or specials such as Josh Finch’s single seater special and Steve Wells’his Locost.
It looked like Steve Wells was set to stand on the second step of the podium, however, Joe Moore knocked him down a step in run 6 claiming 2nd place for himself. Despite being relegated to third place, Steve did claim the class 5 win.
Richard Weaver, consistently kept the second place driver at a considerable distance throughout the day and finished with a well-deserved win.
We would like to thank everyone who came to support the club during these difficult times and enjoyed a great day of motorsport.
However, due to worries about the spread of COVID-19, Motorsport UK have now revoked all organising permits until at least the 30th of April.
As a consequence the Island Car Centre Sandown Sprint, planned for 28th & 29th March, will be postponed until further notice.
The Autotest to be held at IW College on 5th April and also at Knighton Sandpit on 19th April are also postponed.
I am sure you were all looking forward to attending the Sandown Sprint on the 28th and 29th March.
Please visit our website for more information, updates and detailed event results.

Check out the VIDEO report for this event below

Motorsport UK has today revoked all organising permits until at least 30th April 2020. As a consequence the Island Car Centre Sandown Sprint, planned for 28th & 29th March, will be postponed until further notice.
The Autotest to be held at IW College on 5th April and also at Knighton Sandpit on 19th April are also postponed.
I am sure you were all looking forward to attending the Sandown Sprint on the 28th and 29th March.
With regards to refund of entry fees, any competitor wishing to have a refund of their £160 entrance fee need simply to request one by email to sprint@iowcc.co.uk and this will be arranged. However, we have every intention of holding this sprint as soon as circumstances allow, and should you wish us to hold your entry fee we can do this. By holding your entry fee this will guarantee you a place on the replacement date.
For our mainland competitors:
Any competitor which had purchased ferry travel via Lymington or Portsmouth using the discounted booking portal that had been arranged, will automatically receive a full refund from Wightlink within the next 7 days and their ferry travel will be cancelled.
If you still wish to travel to the Isle of Wight on your original ticket, you will need to re-book.
Any competitor who has booked ferry travel via Red Funnel using the special single use discount code already provided should contact Red Funnel via email to sales@redfunnel.co.uk quoting the booking reference, lead name and travel dates to arrange a refund.
David Richards, chairman of Motorsport UK, explained, “Clearly we live in challenging times and exceptional measures are required. The decision to suspend Motorsport UK permits on a temporary basis is not one that was taken lightly as the industry employs many thousands of people.
However we have an over-riding responsibility to our members and the friends and families of our community. Furthermore, our social responsibilities extend to the broader population and the potential drain on valuable public health resources on which we are all reliant.”
Ticket holders and other stakeholders will be contacted directly in due course. “Once the current restrictions are lifted, we’ll want to sit down with the Isle of Wight Council and other partners to find a way forward. We’ve already proved the event is viable and we’ll look forward to announcing details as soon as possible,” commented promoter Tim Addison of Solent. 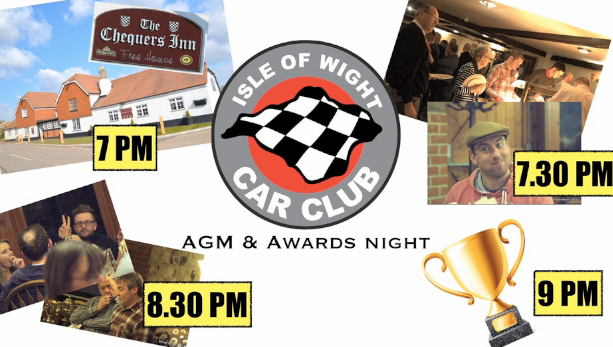 Drive at 14 years old
Learn car control in a safe environment, have fun and be the envy of your friends
New for 2020 the IOWCC will be encouraging 14 to 17 year olds to join the club and compete in the new youth championship series.
A member can drive at one of our events as young as 14 years of age, as long as they are have a passenger with a drivers licence who is experienced in autotesting.
The car must be a production touring car (i.e. back seats and a roof) under 2000cc.
Members as young as 12 years old can be a passenger with an experienced driver with a current driving licence.
In addition all competitors and passengers must have a valid Motorsport UK RS clubman licence – this licence is free and can be applied for via the motorsport uk website or at race control on the day
https://www.motorsportuk.org/get-s…/2020-rs-clubman-licence/ 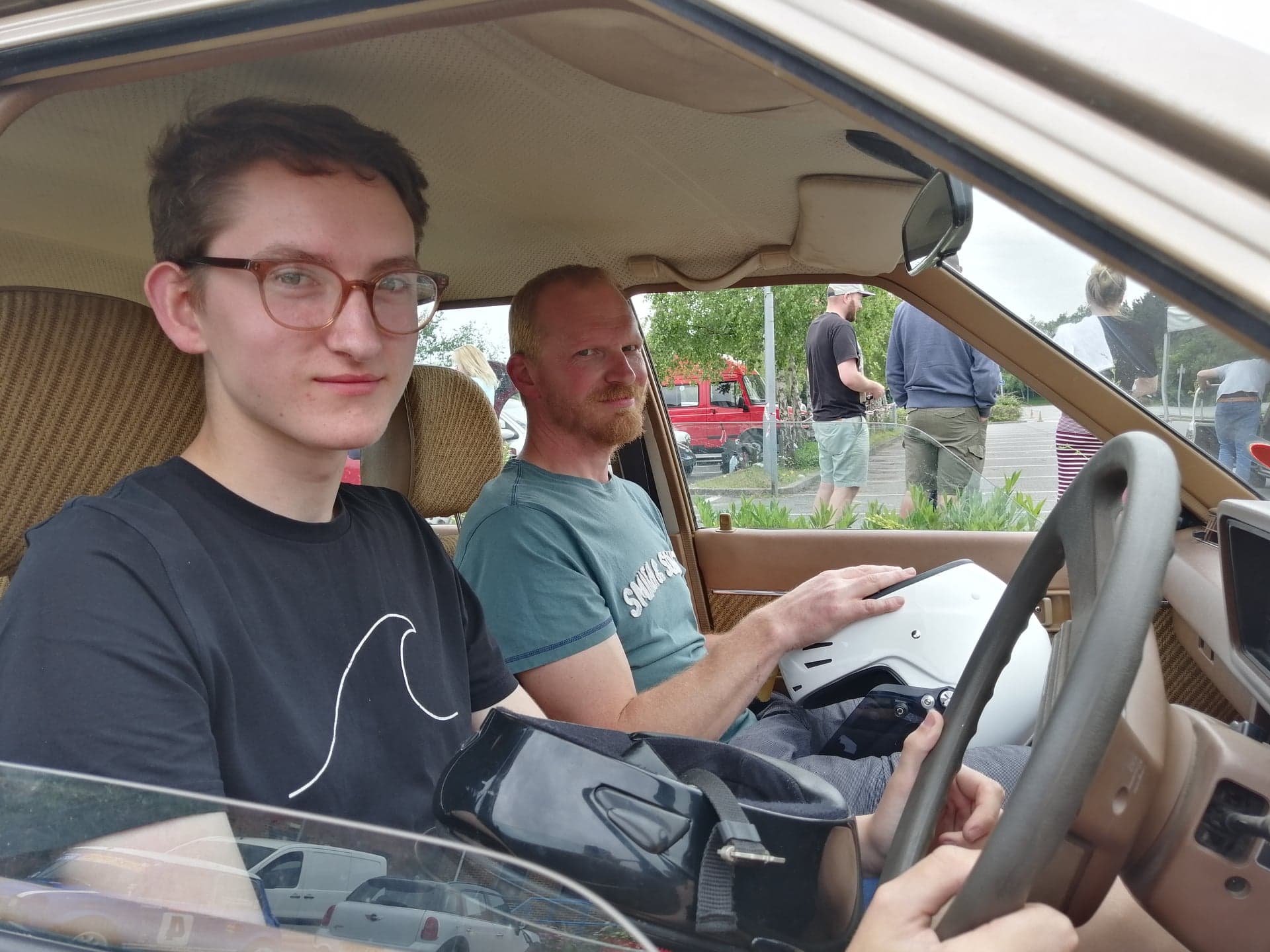 Dear Club Member Motorsport UK have a new licencing structure for 2020, if you already have a Motorsport UK licence for sprinting, autocross, rallying or circuit racing there will be a few small changes, however –

To compete at Isle of Wight Car Club events as a driver or a passenger in 2020 you will need to hold a new RS Clubman licence as a minimum, which will be free of charge.

The RS Clubman licence can be applied for online from the 18th of November via the motorsport UK website and aims to encourage more grass roots participation, as well ensuring all Motorsport UK event competitors are covered by comprehensive insurance. Additionally, licence holders will have access to Motorsport UK’s Member Benefits Programme that includes the new upgraded personal accident cover. 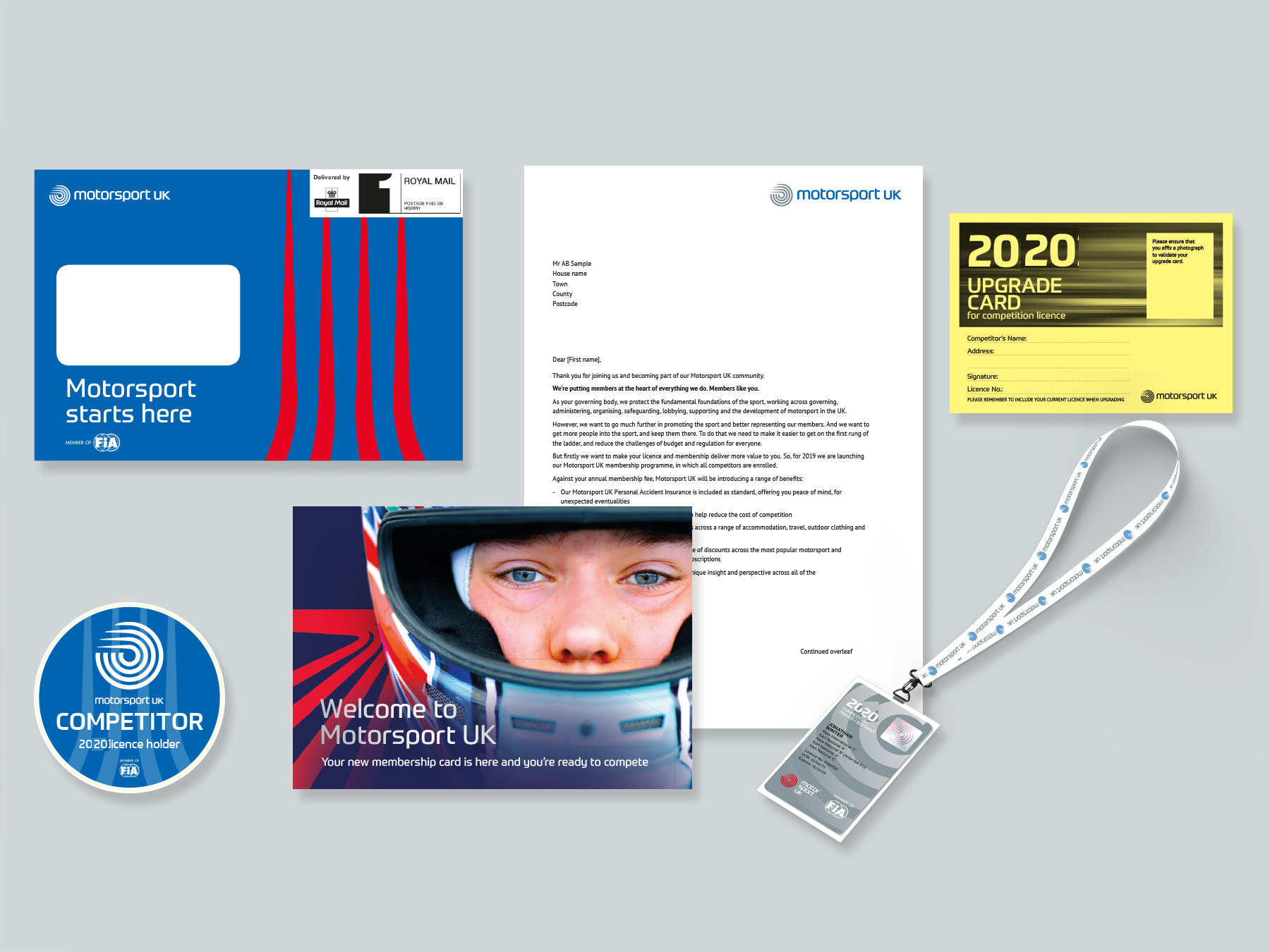 If you want to get close to the action at the Sandown Sprint there’s no better way than by being a paddock or track marshal at the event. Simply download the form and return it to marshal co-ordinator Tony Cole.

No previous experience necessary – we are happy to train enthusiastic people, find you an appropriate role and pair you with an experienced motorsport marshal. 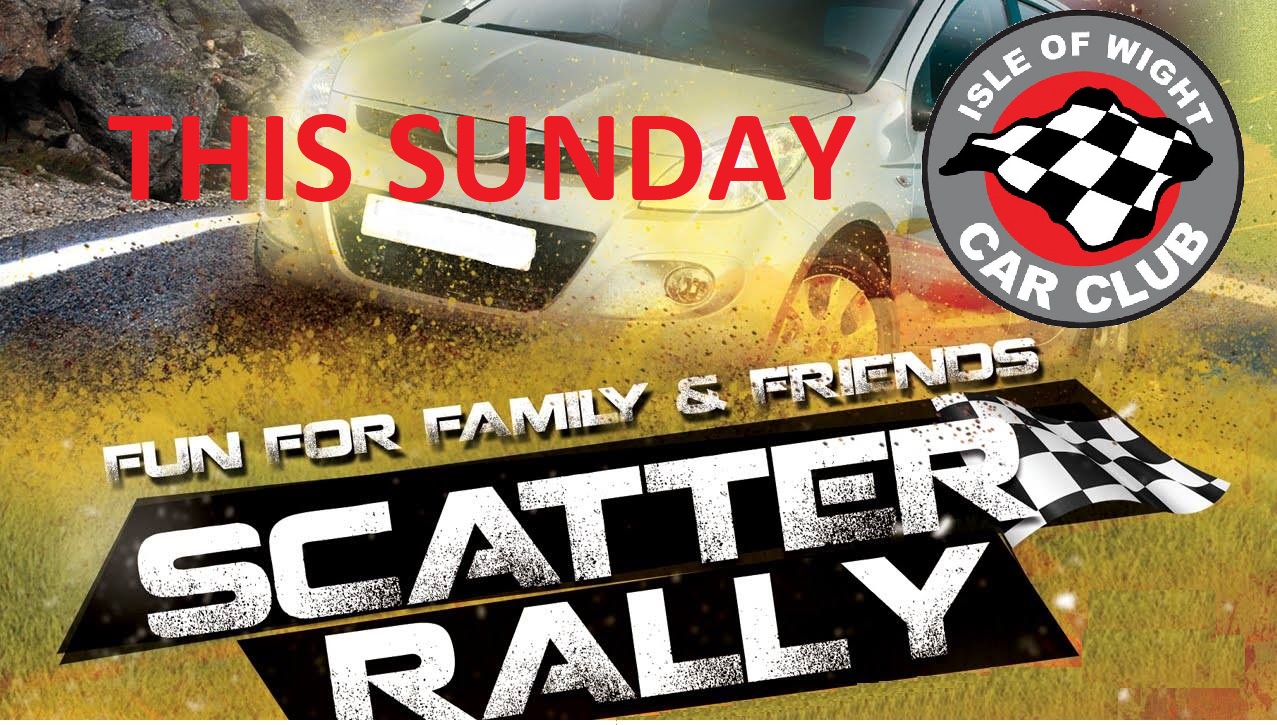 This is a family friendly scatter rally and social. Kids and grandkids are welcome.

Briefing at 11am and first car away shortly after. Clues will be easy to find and you will have 1 hour to get as many as you can! Winners will be announced once all teams have returned, in time to get an excellent pub lunch.

Entry is £5 per car and not all team members need to be IOWCC members.

FAQ – at the start you are given more locations to visit than you can possibly achieve within an hour, to prove that you have been to that location you need to answer a simple question such as, how many steps to the front door, or what name is carved on the bench. you need to be back at the start within an hour other wise you loose points for each minute you are late. each team will be given a separate start and finish time so you don’t all start at the same time. you can have as many team members in the car as you wish so its great fun for the family. only £5 per car.

Entries are now LIVE for the Sandown Sprint.

New Motorsport UK RS Clubman licence from 2020
Dear Club Member,
We hope you are looking forward to the upcoming year.
We wanted to let you know that from January 2020, Motorsport UK will be introducing a requirement for all competitors in Motorsport UK permitted events to hold a Motorsport UK competition licence; in addition to your club membership. This will be at a minimum the new RS Clubman licence, This applies to new competitors as well as to anyone previously competing solely with a club membership card.
The good news is that this entry-level, RS Clubman licence, will now be free.
This initiative is being introduced by Motorsport UK to encourage participation at grass roots level as well as to ensure that all competitors are covered by comprehensive public liability and personal accident insurance. It replaces the Non-Race Clubman licence, (which in 2019 cost £29). All licence holders will have access to the Member Benefits Programme which provides substantial discounts on well-known brands’ products and services, and can offset the costs of competing.
If you have not previously held a Competition licence or not renewed in 2019, it will also be a requirement to apply for a new RS Clubman licence in order to compete or be a passenger in Club events. This is free of charge and applicable to Autotests, Trials, Cross Country and Road Rallying including 12 Cars and Scatters. Please note: an RS Clubman licence is not required if you are already in possession of a current 2019 Competition licence.
You can apply for an RS Clubman licence from the Motorsport UK website from 18 November.
We wish you a safe and enjoyable year of motor sport in 2020.

visit Motorsport UK via the link below