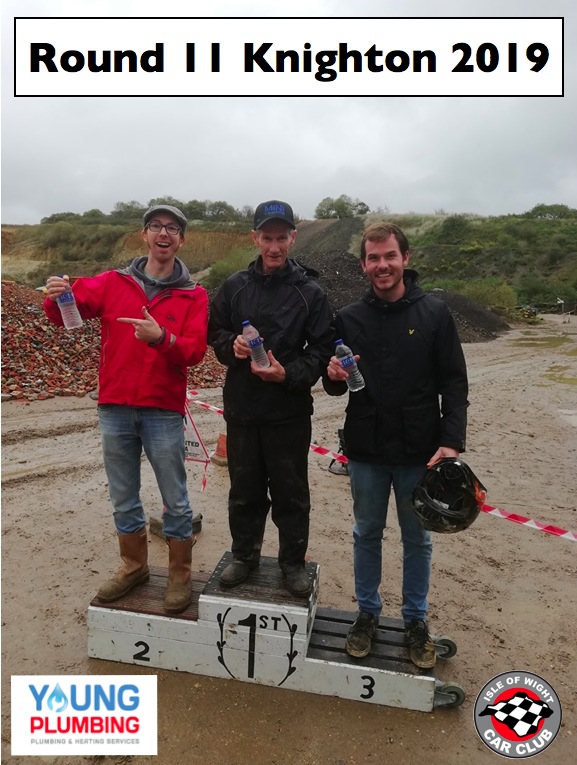 The final unsealed surface event of 2019 was held at Knighton Sand pit.
Despite a low turn out of current members, the club were excited to see 4 new members take the plunge and split the cost of a VW polo so that they could experience a day of grass roots motorsport.
Even though the weather was inclement this did not dampen their enthusiasm, interestingly all but 2 cars were competing in the unmodified classes proving that driving slow cars fast is not only cheap but extremely fun.
Alex Conrad, Ryan Whitehal, George Richards and Ben Ash were super competitive in class 1 and were posting faster times as the day progressed, interestingly all 4 recorded their fastest lap of the day on their last run despite having to use their space saver spare wheel on this run. Not only did Ben Ash post the fastest time of the group, he also finished 3rd overall allowing him to stand on the podium during his first ever event.
Dean long took the honours of the fastest class 2 car in his MX5 despite Barry Richardson removing the front bumper for him.
Marion Brett was the fastest lady of the day in here shared class 3 classic mini
Joe Moore used his all wheel drive Subaru to take the 2nd step of the podium, however, the best news of the day was that after decades of competing at the Isle of Wight Car Club in his classic mini, Steve Brett stood on the top step of the podium.
It was so nice to see Steve finally win an event and posting a time over 1.3 seconds quicker than Joe in his Subaru it was well deserved.
The next event on the Isle of Wight Car Club Calendar is a two day sealed surface event at both BAE and the Isle of Wight College on the 2nd and 3rd of November, please see the club website for more information www.iowcc.co.uk