Round 10 of the Isle of Wight Car Club calendar brought us back to Haslet Farm. In the past we have used 3 different fields at this venue, however, this time it was the nearest field to the sand pit and included a steep hill with fantastic views at the top, although driving between the cones required lots of concentration, so I can imagine not many had time to take in the beautiful vistas.
With 13 drivers rearing to go the event started on lush green grass and those in the standard class were wishing they were allowed to run knobblies. However, it did not take long for the soil to be exposed and grip thankfully was not an issue.
In run one as expected a Subaru topped the times – Dean Long was driving Jon Barret’s clubby and was putting his skills as a national rally driver to good use with a time of 28.90. But who was second? No, not a another Subaru or a single seater special (by the way Chris Wilson did not attend this event as he was very hung over), it was Steve Glass in his class 4 Honda. Steve was only a second behind Dean and well ahead of the rest of the other competitors.
In run 2 Dean pushed too hard incurring a penalty for striking a cone and it was Jo Moore in his Subaru who took the lead and dropping the top time to only 1.17. Steve Brett in his class 3 classic Mini was now in second place.
Run 3 found Dean Long, Jo Moore and Jon Barret all incurring time penalties allowing Steve to retain his lead and Wayne Hole to take second place in his class 4 Ford Focus.
The battle for the day’s class 2 honours was between Louise Wren and Shane Parry in their Ford Puma and Hannah Thomson and Kevin Richardson in their Suzuki Ignis. All were competing under the PCA rule, so were both drivers and passengers. Hannah was obviously enjoying herself as here laughter whilst driving could be heard back at race control.
Hannah and Louise were also in competition to see who could win the fastest lady of the day award. Hannah was ahead all day, however, on her last run Louise found some time and was in for a real chance of taking the lead but just missed out finishing an incredible 1 tenth of a second behind, giving Hannah the win.
Kevin was also passenger for Steve in class 3 again, showing Steve the way and preventing him from making any wrong tests.
In class 4 Jon Barrett and Dean Long were also taking advantage of the PCA rule being a passenger for each other. It is slowly becoming clear that any weight disadvantage of carrying a passenger can easily be out weighed by having someone guide you through the course and pushing you on to go faster. With this Jon Barret now topped the leader board at the end of round 4.
Class 5 is for cars that do not fit into the modified production car classes and is the domain of the single seater specials driven by Andy Williams and Josh Finch and highly modified cars such as Dan Young’s ex autograss classic mini. These specialist cars normally rule the roost but is seems all wheel drive could not be beaten today.
At the close of the event non of the top 3 drivers could improve on their 5th run times and Jon Barret finished 3rd in a time of 1:09.20, Jo Moore claimed the 2nd step with a time of 1:08.76 and only 8 hundredths of a second ahead was Dean Long.
All podium finishers were presented with champagne supplied by our podium sponsor Young Plumbing.
In a departure from the norm it has been decided to honour our class winners as well. Not only do they get a hand shake from our club chairman and stand next to the podium for the promotional photo, they will also be issued with a class winner sticker. This will hopefully help acknowledge that it is just as hard to win your class as it is to win overall.
Our next event is also an unsealed event on the 28th of October at Knighton Sand Pit. Don’t forget the big event of the year our Healy weekend on the 3rd and 4th of November. This is a 2 day sealed surface event. Day one is at BAE systems and the Sunday is at the Isle of Wight College. You can enter and treat these venues as individual championship events, however, we will also combine the time of individual drivers over the weekend and the lowest combined time will win the coveted Turbine trophy. Please invite your friends to watch or better still take part. 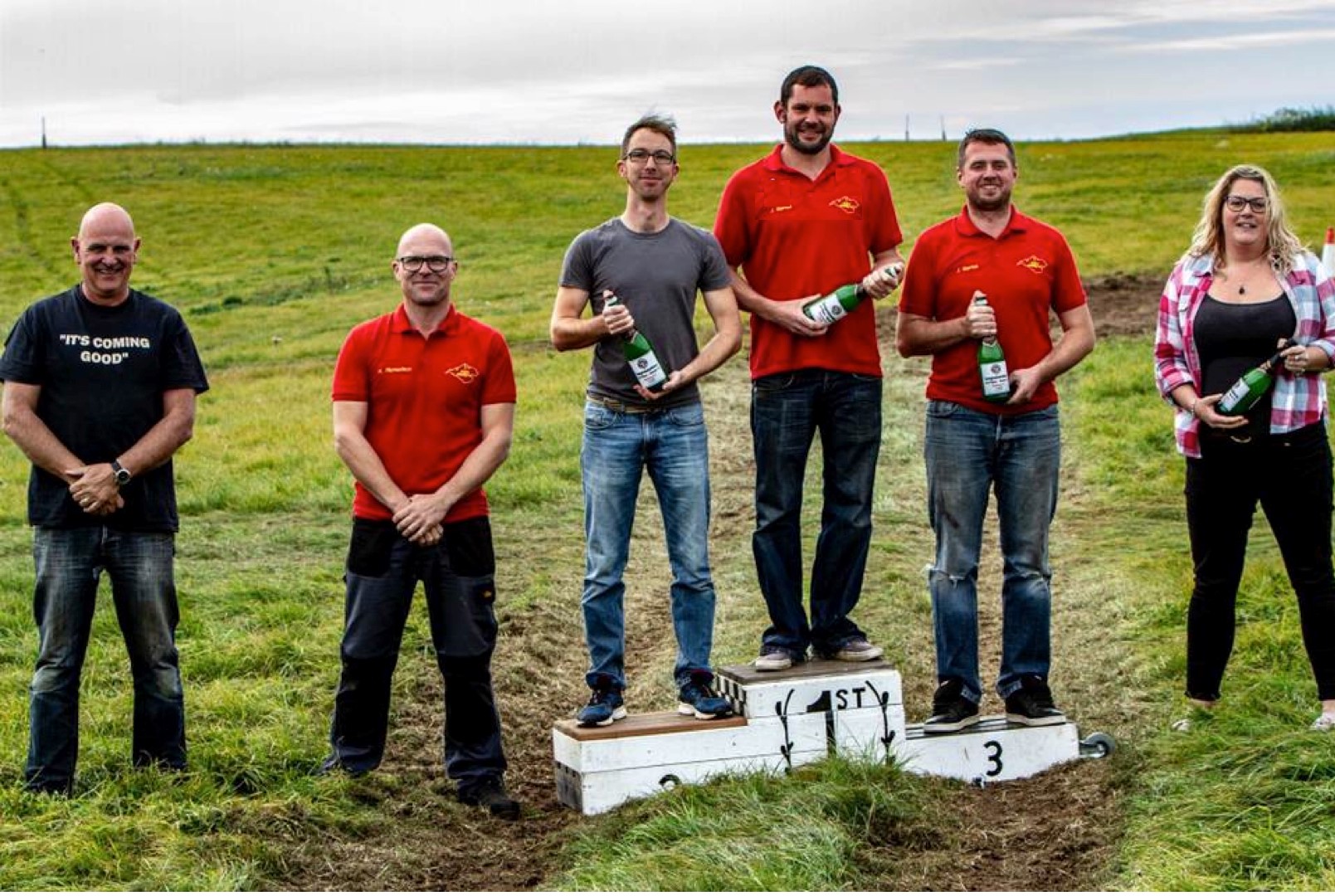