Round 9 of the Isle of Wight Car Club calendar was an unsealed surface event held at Atherfield.
This has always been a popular venue, however, what seems to be growing in popularity is the number of competitors signing up to drive with a passenger. Under the MSA’s PCA rule, drivers can compete with a passenger to help guide them through the course, help with driving techniques or just for fun. This is starting to make events much more accessible and fun for all. So if you would like to take part in a PCA, just ask during sign on at the next event.
As a complete contrast to our last trip to Atherfield, the sun was out and the grass was dry. As usual it did not take long for the top layer of green grass to erode to reveal a grippy dirt path for all to follow. Any driver who ventured off this well-worn track later would soon loose traction, so the name of the game in the afternoon was to keep it on the brown stuff.
At the start of round 1 many competitors held back wanting to learn the course by watching other drivers. Wayne Hole as usual knew the course right off the bat and was the first off the line, posting a very respectable first run of 2 minutes 10 seconds.
It was good to see a class 1 car again with Steve Brookes and Rich Harrison piloting their standard Fiesta. At the end of the day it was Rich who posted the fasted time out of the two finishing 13th overall.

In class 2 it was great to see the return of Louise Wren and Shane Parry in their Ford Puma and Barry and Kevin Richardson driving their Suzuki Ignis, with the latter claiming class honours and finishing 15th overall.
Kevin was also in class 3, however, not driving. He was navigating for Steve Brett in his classic Mini, as Steve was unsure of the course. Both had great fun pretending they were on a rally stage. Steve was the only car in class 3 and finished 10th overall.

Class 4 was the most popular class of the day with 10 drivers competing in modified cars over 1400cc.
Hannah Thomson and Vicky Cox were not only battling in class 4 but also for the title of fastest lady of the day. Sharing Vicky’s 205 and being a passenger for each other, with Vicky’s guidance Hannah’s times consistently improved during the day, However, Vicky’s experience and skill allowed her to claim the bubbly at the podium celebrations and finish 7th place over all.
It was the Subaru of Jon Barrett (affectionally known as Clubby) that dominated this class. Also driven by Dean and Tony Long this car had grip and power allowing Dean to win the event with a whopping 1.74 seconds over second place and Jon took the third step of the podium ahead of Wayne in his Focus who finished 4th.

There were a smattering of mechanical incidents during the day, mainly due to Josh Finch. Josh was unable to bring his special to the event as he doesn’t have a suitable trailer, so Andy Williams offered him a drive in his special. Credit where credit is due, Josh drove Andy’s special like a demon and Andy was very impressed with how Josh’s driving skills have developed, right up to the point where he managed to drive over the rear mud flaps and totally mangle the rear arches (just like he did to his own special at the Autocross).

Despite having mangled rear mudguards Andy Williams seized second place in his special.
Standing on the podium with Jon and Dean he felt the full force of the bubbly supplied by our podium sponsor Young Plumbing.

We would also like to thank Alan Marsh for some amazing images of the event.
Our next event is also an unsealed surface event at Haslet Farm on the 30th of September.
See our website for more details. 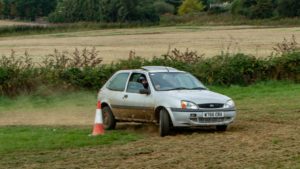 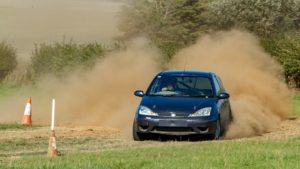 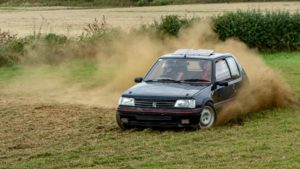 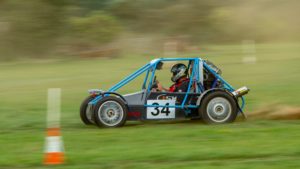 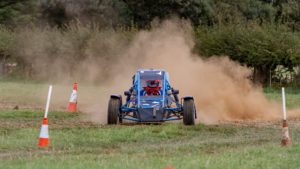 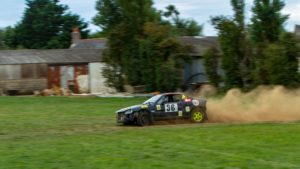 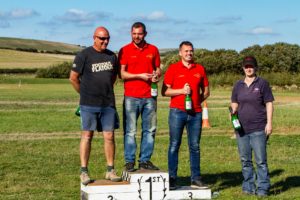 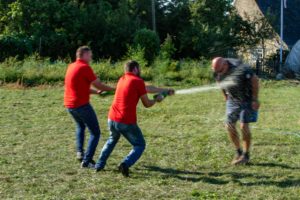 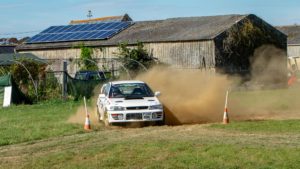 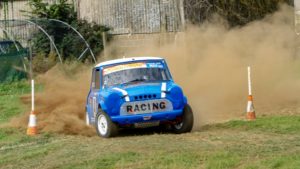 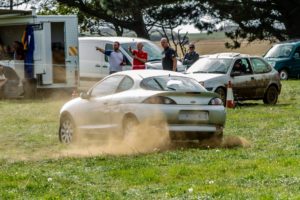 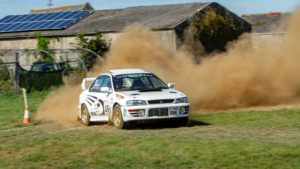